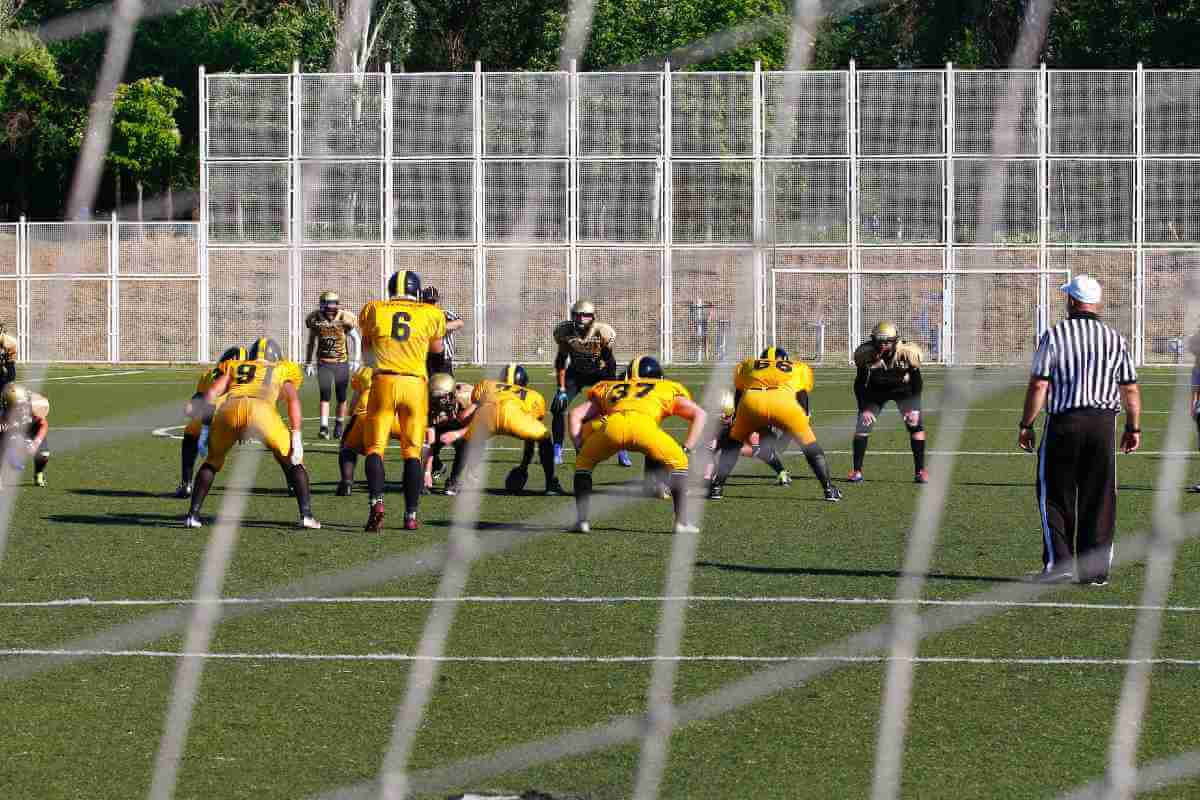 In American football, multiple defenses are employed. If you’re a coach or player looking for a simplified defense, then don’t look further than the 4-4 defense.

Widely employed in youth football, the 4-4 defense is quite popular because of its simplicity. This is a classic American football defense with a 4-4 scheme. Just from the naming, it’s a simple defense with four defensive linemen upfront and four linebackers just behind.

The simplicity of the defense allows players at all levels to learn valuable defense basics.

What is 4-4 Defense in Football

The remaining two players are safety and two cornerbacks. A 4-4 defense is one based on athletism, speed, and intelligence as opposed to strength and size.

It’s a defense focused on stopping runs. It works by putting eight men closer to the line of scrimmage. The offense finds it hard to know where the pressure will come from.

However, the defense is quite vulnerable to big plays through the air. I’ll cover this on the strengths and weaknesses of a 4-4 defense.

When describing a 4-4 defense, versatility is crucial as players often change roles. A linebacker at the youth level can become a defensive lineman in professional leagues.

The history of a 4-4 defense dates back to the 1940s. Teams employed four frontmen to deal with the Bear’s T formation. In the 6-2, two linemen would drop and form short zones.

The 4-4 defense was also used to defend against the spread offense. The 6-2 defense will disappear by the 1950s. Wide tackles by then had evolved and were handling interior attackers and outside responsibilities in the T Power formation.

4-4 defense evolved further to help deal with different offensive formations. For example, terms like “5 spoke” were invented, with the defensive ends acting as outside linebackers.

A lot of credit for the 4-4 defense goes to Homer Smith, with the 1940-style defense showing an 8-man line. The six-man lines and six wide tackles changed and became a 4-man line defense.

As you’ve seen, a 4-4 defense features four defensive linemen up front and four linebackers just behind. Let’s break down the different positions needed in the 4-4 defense.

The first position is defensive tackles. Defensive tackles need to be big and strong. However, they require speed and leveraging ability to ground offensive linesmen more than strength and size.

It’s a crucial position in the 4-4 defense. A defensive tackle needs to hold ground or penetrate the line of scrimmage. He can take on both the offensive tackle and guard.

Next up is the defensive end position. Defensive ends are tasked with getting to the quarterback as fast as possible. They usually fight past offensive tackles and must be strong.

However, they also need to be athletic to act as linebackers. In the 4-4 defense, different game situations can force the ends to drop and provide coverage as linebackers. This is the same case for outside linebackers.

On every running play, the ends need to run as possible through the line of scrimmage and get to the quarterback. But, they should do so cautiously to avoid over-committing.

In the 4-4 scheme, you’ll find two inside linebackers. These are Buck and Mike linebackers. Mike needs to have a nose for the ball and be aggressive. As such, he will shade the weak side while Buck sheds the strong one.

Mike is the quarterback of the defense, as is the case with most defense formations. Overall, these two are tasked with stopping the run. However, Buck takes more roles in pass coverage than Mike.

We also have the outside linebackers position with two players. The linebackers here are Sam and Rover. Sam sticks to the strong side while Rover sticks to the weak side. Some are tasked with blitzing but can also play the run. Occasionally, Mike needs to cover the tight ends.

Rover takes the single versatile position on the 4-4 defense. He lines on the weak side but can move anywhere, depending on the play call. Rover drops in for coverage or gets to the quarterback.

Lastly, we have the secondary position, where we have cornerbacks. Cornerbacks in the 4-4 defense must be intelligent and have good speed. In addition, they need to be agile for a quick change of direction.

Cornerbacks line up 3-5 yards from the ball. However, they remain grounded because of big plays if they jump. They need to avoid receivers getting past them if they jump.

The safety position in the 4-4 needs to be athletic. This helps in coverage and run plays.

Who Should Use The 4-4 Defense

All teams can use the 4-4 defense at all levels of football. It’s 4-4 quite popular in youth-level football. But teams in college and NFL can use the defense effectively and achieve desired results.

Teams with four excellent linebackers can use the defense perfectly. It also works well for teams with strong safety. The safety needs a big body size and capability to play at the line of scrimmage.

Apart from the extra defensive lineman up front, the defense is pretty similar to a 3-4 formation.

Strengths Of The 4-4 Defense

First, the 4-4 defense can cause problems for the offense due to the many bodies at the line of scrimmage. It’s effective against the offensive line and can create challenges for the offense.

Thirdly, the 4-4 defense greatly reduces coverage time. The extra men on the line of scrimmage give quarterbacks little time to make a throw. With only three players in the secondary, it’s a good thing.

It’s also effective against run plays due to the first and second levels of defense near the scrimmage line. This makes it ideal for youth football, where run plays are more than pass plays.

Weakness Of The 4-4 Defense

Despite the great strengths, the 4-4 defense is weak against passing plays. With more bodies at the line of scrimmage, space is left for passing plays.

When the offensive line blocks extra pressure, they can easily beat a 4-4 defense on passing plays.

It also requires a lot of game reading. The linebackers and secondary in the 4-4 defense have a lot of reading to do. A quick determination of whether the offense is passing or running is needed for effective defending.

A 4-4 defense is also susceptible to misdirection from the offense. Offensive players can easily trick defenders into a play and then choose a different one.

It can also create mismatches for the defense when the offensive has speedier receivers. This happens because of the less safety in the 4-4 defense.

Running a 4-4 defense isn’t different from most defense formations. You need to follow the stages below.

The first stage in running a 4-4 defense is setting up the defensive line. Here, as I mentioned earlier, you need four defensive linemen up front.

Stage 2: Set Up the Linebackers

Sam and Mike are the middle linebackers and line up between the defensive ends and defensive tackle.

Bandit and Will, the outside linebackers, line furthest directly over the offensive linemen.

Stage 3: Set up the Secondary

Lastly, you need to set up the secondary backfield where there is free safety and two cornerbacks.

What Is The Best Offense Run Against A 4-4 Defense

The tripe offense run is the best against a 4-4 defense. It forces the defense to commit more men trying to stop the run than they usually do. This leaves spaces at the back for the offense to utilize.

While both defenses have their strengths, the 3-4 defense is considered better. The 3-4 defense has greater complexity with coverages and disguised blitzes.

The 4-4 defense is good at stopping running plays. With more players at the line of scrimmage pressuring the offensive line, it becomes difficult for offenses to play runs.

It’s a defensive formation that puts more men near or at the line of scrimmage, putting pressure on the offensive line. A 4-4 defense is versatile and flexible. It works well for youth football but can also be used in college and NFL games.

For youth football, the defense formation allows players to learn all aspects of the game. It can run with any wrinkles and cause confusion at the offensive line. 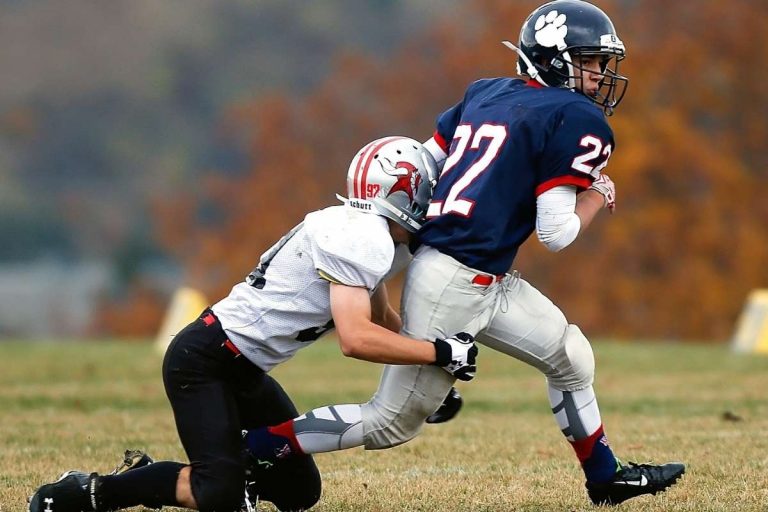 American football is one of the most challenging sports. You’ll see very nasty tackles and great runs. It…

Can you imagine only 11 players have an under 4.3 seconds 40-yard dash record at the NFL combine… 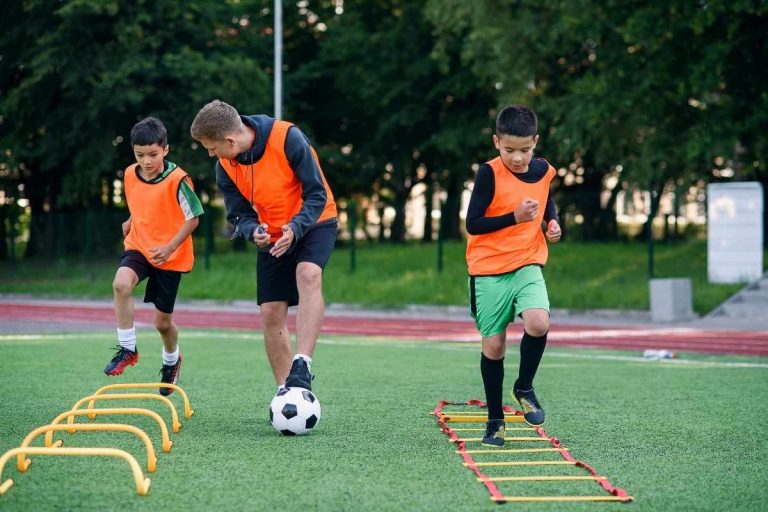 Soccer is a game of intense running and high activity. To get the best out of your team,… 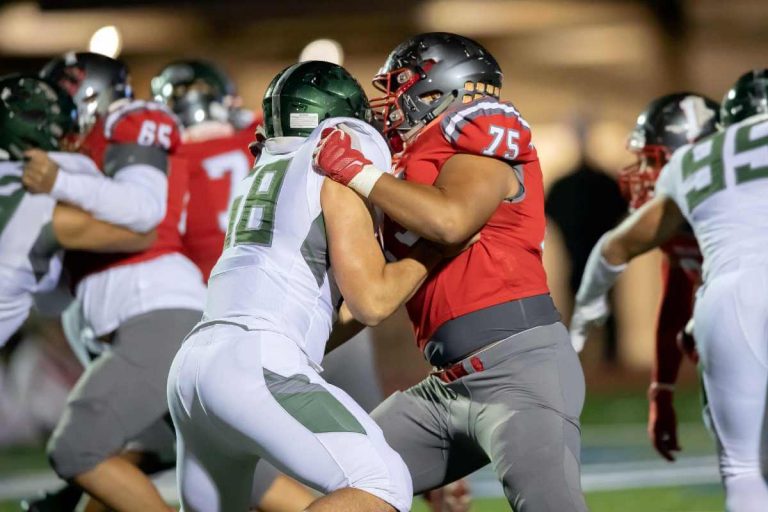